If you’re reading this, I’m guessing that you’re either curious about the possibility of having a natural birth (but a little afraid of it at the same time); or, you’ve given birth before and you’re not happy about your previous experience. And this time around you want to do it very differently.

Either way, I can help you to have a truly ecstatic birth and completely avoid the stress and trauma that comes from unnatural interventions.

Here’s where it all began.

I was pregnant with my first child.

I was utterly delighted… but downright terrified at the same time.

Even though I had always dreamed of having a big family, the suffering that I had been conditioned to believe was inevitable with childbirth had me petrified.

It was in this headspace that I was introduced to Caroline by some divine intervention – the angel who would eventually become my very own doula.

Caroline slowly prized-open my mind to the idea that natural childbirth was, well, completely natural.

Everything she said made innate common sense to me:

But I was still riddled with fear, even though I now knew a natural birth was the “right” thing to do.

I was constantly worried about the pain and all the other horror stories my friends were all too eager to tell me about (which I ultimately learned was cultural PTSD from society-at-large, as well as their own unnecessarily traumatic births.)

So even though Caroline was a massive pillar of support, I was still battling with a huge internal struggle.   I so desperately needed to overcome my debilitating fear of natural childbirth.

What made it worse was that I’d spent my career working in hospitals, predominantly with surgeons. This meant I’d seen firsthand how surgery can often go: sometimes corners get cut because of budget constraints and other pressures. So I never wanted to be on the operating table either.

Not only that, but a lot of the surgeries I’d witnessed were to correct damaged pelvic floors after ‘managed’ vaginal births.  I only found out later that these car crashes were caused by epidurals and unnatural amounts of forced pushing.

So at this point what options did I have left, if neither natural birth, being completely numbed by an epidural nor having a C-section appealed to me?

I felt completely stuck between a rock and a hard place.

I knew I had to tackle this head-on with as many tools and techniques as possible. And knowledge. Real facts. No more fear-based, biased info.

Only then could I make a truly empowered decision for myself and my baby.

Over the last few centuries, societal norms (as decided by a – you guessed it – man!) have conditioned us to believe that birth is some sort of a medical emergency and something to be feared.  And that women are incapable of delivering their own babies without being poked, prodded and monitored throughout by strangers, all under harsh lights in a foreign environment.

But I only needed to take a look at the animal kingdom to see how birth is routinely problem-free when in a quiet space, away from all stress and threats. When we follow our instincts there’s very rarely a need to be rescued.

It didn’t take much research to realise that our ancestors were physiologically speaking just like we are.  They had been birthing beautifully for over 300,000 years. And what surprised me even more was the fact that they had far less birth complications than we do today.

Any problematic births they experienced were basically down to poor nutrition & inadequate hygiene.  This led to either immune-compromised mothers or infections being contracted postpartum. But nowadays, those of us in the Western World are lucky enough to be able to have access to both excellent nutrition and hygiene.

I realised that I was NOT physically flawed at all.

In fact, my body was literally made to do this (and so is yours).

So, in the end – you guessed it – I birthed my baby boy completely naturally.

And experienced a stunning rite of passage that birthed me as a mother.

But what shocked me the most about it all was not only could I do it naturally without drugs or interventions, but I absolutely loved it! I reached a state of ecstasy, bliss, and enlightenment that I didn’t even know was possible.

I couldn’t wait to do it again. So I did. Four more times.

And I’m now pregnant with my sixth.

And still as excited as ever to give birth.

And I want this for you too.

Ever since I had the unexpected insight of how truly ecstatic birth can really be, it’s been my life’s mission to help birthing mamas and their babies avoid trauma at all costs.

I want every woman to know that if I can do it, so can you.  We are all utterly amazing and this needs to be shouted from the roof tops!  And the fear-mongering has to be stamped-out.

Look, I’m not super human or a sadist that relishes pain.  I just discovered something magical within me that we all have and I want to help you tap into that innate power too.

I literally can’t watch a natural birth without bursting into floods of happy tears. And I want…no NEED…to help your birth go as seamlessly as it was meant to be.  I fervently believe that every woman deserves to experience the true wonder of this miraculous, life-changing event.

Why Work With Me?

They say you’re not a real doula until you’ve had 6 natural births of your own so I’m definitely qualified by experience!

But more than that, everything that I understood in that moment of giving birth for the first time (and each of my subsequent births) wasn’t a fluke.  The geek in me still wanted to make sure beyond a shadow of doubt that the science supporting natural childbirth being infinitely safer could back it all up… and it does.

Everything I’ve learned, experienced, researched and personally tested has been condensed into a sound, tried-and-true blissful birthing system.

I do this in 3 very distinct ways:

So whether you’d like to explore a gentle water birth at home with a midwife and doula. or a freebirth where everything is on your own terms, or even a birth centre, I will prepare you so that you’re relaxed, calm, and empowered to have a blissful birth.

After transforming the birth experience of dozens of women, I want to help you too.

Take your power back, love. For your baby, and you.

I am your biggest supporter and I will stand for you and with you.

And I will celebrate with you in happy tears at your own blissful birth.

We will do this together. As we were meant to. 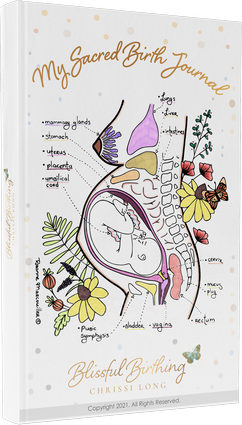 My Gift to You - Free Download 'My Sacred Birth Journal'

Take your birth from clinical to magical with this new paradigm birth plan that puts you in your power.

Simply pop your email in to receive your instant free copy.